The first railway to pass through Watford was the London & Birmingham Railway, which opened from London Euston to Boxmoor on 20th July 1837. The original Watford station was sited just north of the present day St Albans road overbridge, and the original station building still exists today, in use as a used car sales office. In 1846 the London & Birmingham became a part of the vast London & North Western Railway (LNWR). 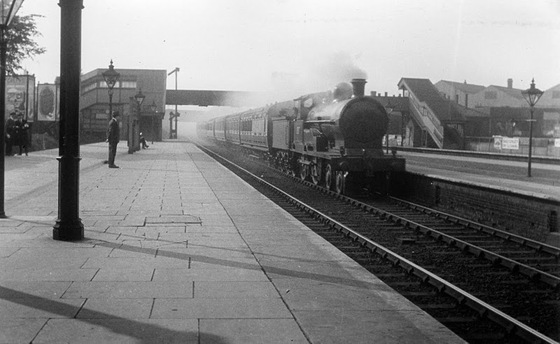 An up train speeds through Watford Junction in LNWR days. Photo courtesy of and copyright Ben Collins. The original London and Birmingham station (still standing today) was just out of sight, on the right, beyond the second bridge in the background, which carries the St Albans Road.

From very early on, a branch line railway had been proposed to link Dunstable, Luton and St Albans with the new main line at Watford. However, for various political and economic reasons, the line was only ever to reach St Albans. Had the plan to extend the line to Dunstable and Luton ever been fulfilled, the line may have had a considerably different character from today’s tranquil single-track railway.

The LNWR received parliamentary powers to construct the 6 mile, 32 chains long branch line on 11th February 1853. Work started in the early months of 1856 and the line was opened to public traffic on Wednesday 5th May 1858. By this time the LNWR had constructed a totally new and much bigger station at Watford, on the site where it has stood ever since.

Intermediate stations were initially planned for “Aldenham Road, Smug Oak and Park Street”, but there were only two to begin with; at Bricket Wood and Park Street. Neither station served a large population centre, and in the summer of 1858 (a matter of months after opening), Park Street closed. It appears Bricket Wood temporarily befell a similar fate around 1859, but by 1861 both stations had reopened. 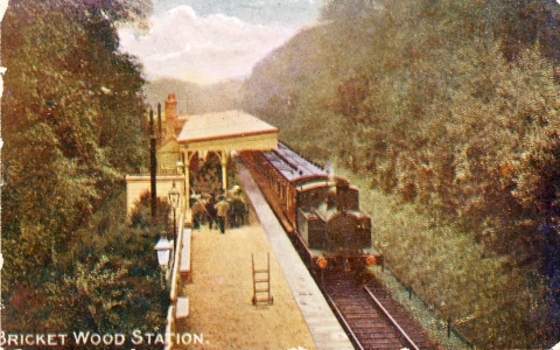 Bricket Wood station, some time in the Edwardian era, pre-1913, before the passing loop and second platform was built. Photo copyright David Horton.

Whilst Bricket Wood station has always been in the same place, the original site of Park Street is a contentious issue. It is thought that it may originally have lain very close to the Hyde Lane level crossing, which is now where How Wood station is to be found (opened 1988). A crossing keeper’s cottage stood at Hyde Lane until the 1960s, and this may have been part of the original station building. The current position of Park Street, adjacent to the Watling Street overbridge, is thought to date from the 1890s.

In the late Victorian and early Edwardian eras, Bricket Wood became an unlikely tourist destination because of two funfares situated nearby. Hundreds of people passed through the station, particularly in the summer months, many of them on day trips to escape the crowds of London. An additional platform and ‘passing loop’ were installed by the LNWR at Bricket Wood in 1913, to cope with the large increase in excursion traffic. This allowed two trains to operate on the branch, and the new platform could accomodate up to 9 carriages. However, the funfares went into gradual decline in the 1920s, and the line never saw such a high level of traffic again. The passing loop and second platform were eventually demolished in 1966. Today’s station is much closer in atmosphere to what it must have been pre-1913! 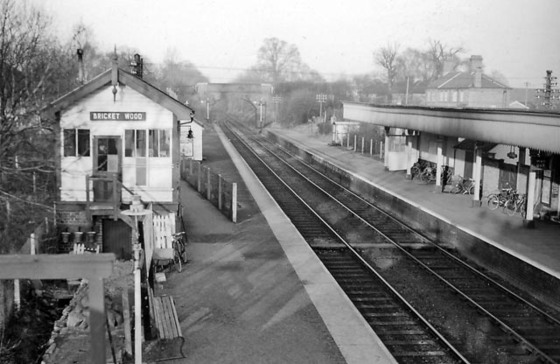 Bricket Wood station on 19th February 1961, showing the second platform, passing loop and signalbox, which were all demolished in 1966. Photo courtesy of Ben Brooksbank.

In about 1910, a small station was opened in an area of Watford known as ‘Callowland’. This was built to serve workers from the various manufacturing companies that were springing up around there. The station was soon renamed ‘Watford North’, but it was not until the 1930s, when massive housing development took place on fields around the station, that the station really came into its own. There was a proliferation of sidings for freight round the north Watford area, extending almost as far as the present day Garston station (some remains can still be seen). Indeed, freight played a significant role on the branch until well into the 1960s. Today, Watford North and Garston are the busiest intermediate stations on the branch. 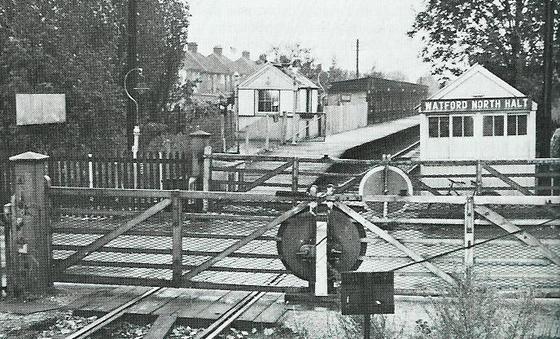 The Abbey line was the first railway that the ancient city of St Albans received. The people of the city were very supportive of the scheme, and the new terminus was a hub of activity. Known originally simply as ‘St Albans’, the name was only changed to ‘St Albans Abbey’ in 1924, to distinguish it from the former Midland Railway station now known as ‘St Albans City’ which was opened in 1868. In 1866, the Great Northen Railway also built a branch line, from Hatfield, that terminated at the station. Extensive sidings to the west served the local freight needs, not least providing space for the daily coal train that arrived to feed the adjacent municipal gasworks. The station buildings, although modest, provided a booking hall, waiting rooms and toilets for passengers, a far cry from today’s simple waiting shelter! A ‘run-round’ loop was provided, which allowed locomotives to run round their carriages at the end of the journey, so that the loco was always at the head of the train. In later years an autotrain or ‘push-pull’ arrangement was used, whereby the driver could drive the train from a specially-converted carriage at the opposite end of the train from the loco. This dispensed with the need to ‘run round’ and was the precursor to modern operating methods. 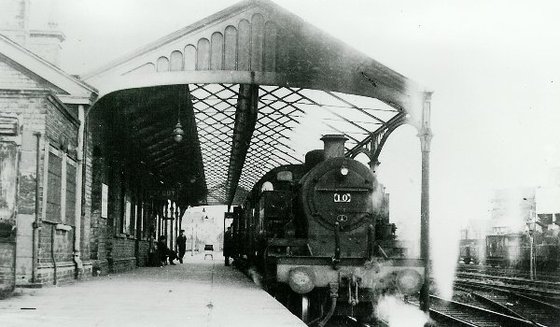 Being a branch line, trains were usually made up of 2 coaches, and hauled by a tank engine. These engines were invariably housed or ‘shedded’ at the Watford Junction engine shed (shed code 1C). Coal trains, being much heavier than passenger trains, were usually worked by tender engines, normally 0-6-0s. Diesel trains gradually started to take over in the 1950s, but the technology was largely untried, so the Abbey Line played host to a variety of experimental designs until the branch was fully ‘dieselised’ for passenger trans in 1955. 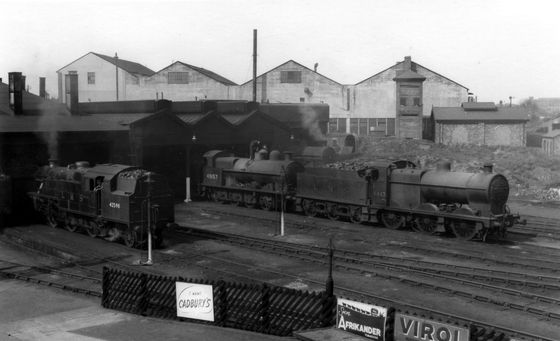 Despite the substantial savings made by using diesel trains, in 1963 the ‘Beeching Plan’ proposed closure of the Abbey Line, along with hundreds of other similar branch lines the length and breadth of the UK. Luckily, strong local protest kept the line alive, and indeed the threat of closure as a heavy-rail operation has been lurking almost constantly every since. The line was to suffer heavily from rationalisation – almost everything save the track, formation and station platforms was demolished in the 1960s. 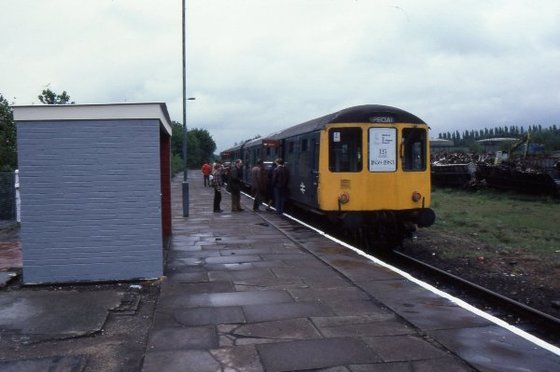 A bleak and windswept St Albans Abbey station after ‘rationalisation’, pictured on 28th May 1983 with a DMU waiting to depart for Watford Junction. Note the recently-demolished gasworks in the background.

Today, we are left with the most basic of ‘basic railways’. It hasn’t all been bad news though; since 1965, new stations have been opened at Garston and How Wood, and in 1987-88 the branch was electrified. In the late 90’s, after a fierce battle to block the conversion of the line to a proposed ‘guided-busway’ system, a public consultation exercise resulted in resounding support for keeping the Abbey Line as a railway and a strategy that builds on its strengths as a local transport link.

With that in mind, July 2005 marked the designation of the branch as a ‘Community Railway’ under the government’s ‘Community Rail Development Strategy’, launched in 2004. Integral to designation was the inauguration of a Community Rail Partnership (CRP), set up by Herts County Council. Since then, various improvements have taken place to the fabric of the line, including the installation of a real-time passenger information system, the replacement of the level crossing at Watford North, and king of them all – the total refurbishment of St Albans Abbey station, such that it is now a tidy, modern, fully accessible station – as befitting the 21st century railway.

Long may the Abbey Line prosper!

St Albans Abbey station today. The station was given a new lease of life between 2008-10 when significant improvements were undertaken, in a joint venture between London Midland, the train operator, and the Community Rail Partnership. Improvements included a new passenger shelter, bicycle shelter, ticket machine, CCTV, signage, fencing, resurfacing and remarking of the car park, a new footpath, and finally a special ‘hump’ was installed at one end of the platform to reduce the stepping distance between the train and the platform. All of these improvements make for a much safer, friendlier and more welcoming station than the one pictured in 1983! Photo copyright Rudi Newman.

Read some memories of the Abbey Line in steam days by Barry Oakley:

I am strongly indebted to S.C. Jenkins (author) and the Oakwood Press (publisher) for information and photographs taken from their book, “The Watford to St Albans Branch”, the only comprehensive history of the branch ever written.

May 5th 2008 marked the 150th anniversary of the line, and a number of commemorative events took place on the bank holiday weekend. As part of these celebrations, the book was reprinted and updated.

Other photos credited here include (numbered from the top of this page):