The mission of the Abbey Flyer Users’ Group (a.k.a ‘ABFLY’) is to represent users and potential users of the Watford Junction to St Albans Abbey branch line, to fight for the long-term future of the line and campaign for further investment. 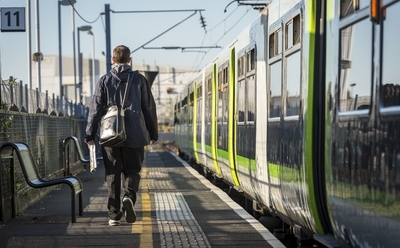 Our ‘top level’ aims are to:

Our specific objectives, in support of the aims outlined above, are as follows:

Currently the line operates on a 45 minute timetable from Monday to Saturday, and hourly on Sundays. Improving this to a minimum of 30 minutes would:

Late evening trains were withdrawn circa 1995 on the grounds of anti-social behaviour, but never reinstated. ABFLY believe that the reinstatement of these services would make the line a viable proposition for people wanting to use it for evening leisure purposes or for working late.

The present trains (Class 321) are approaching 25 years old, with interiors which have never been refurbished. Their appearance now falls far short of what customers expect. ABFLY seek a full interior upgrade of the Class 321 units within the next 2-3 years to bring them in line with national expectations – or higher quality rolling stock to be brought in from elsewhere.

If economically and operationally viable, ABFLY would like to see the development of south-facing through services to/from London termini, or other destinations e.g. Clapham Junction.

This means both actual security and the ‘perception’ of security on stations and on trains. Many people are put off from using the branch, particularly women and young people, because of security concerns. Factors include the lack of staff at stations, poor lighting, vandalism and anti-social behaviour.

The Abbey Flyer is a ‘pay train’ – you are expected to pay on the train. But far too often, there is nobody on board to issue or check tickets, especially during the off-peak. Not only does this cause great inconvenience for passengers, it also means that ticketless travel on the branch is thought to be as high as 20%, at an estimated cost in lost revenue of £200k per annum. ABFLY insist that a conductor/guard should be available, visible and proactively issuing and checking tickets, on all trains, 7 days a week.

Integration with the Oyster Card system

Now a well-respected and standard ticketing system on neighboring London Overground, integration of the Abbey Line into the London ‘zonal’ system and adoption of Oyster would both raise the profile of the line and could go a long way to tackle the chronic revenue collection problems.

These should only be used as a last resort. Where they have to be used, the following conditions should be mandatory:

Although the installation of Passenger Information (PI) screens and Help Points in recent years has improved the situation, the branch still struggles to cope with real-time events.

For example, trains have been known to turn up when the PI screens say they are cancelled, or not turn up when the screens say they are running as normal. Sometimes Rail Replacement Buses are advertised on the PI screens, sometimes they are not. Announcements over the long-line P.A. system are patchy and inconsistent. Help Points depend on information being correct on a national database, which often responds only hours after the event.

We are calling for information at times of disruption on the Abbey Line to be delivered in a timely, accurate and customer-focused way.

Retention of the line as an electric rail-based operation

The line was electrified in 1988 for good economic and environmental reasons. The ‘sparks effect’ attracted and retained new custom to the line. Electric rail rolling stock is quieter, more reliable and better for the environment than diesel trains or buses. Any attempt to downgrade the line to diesel train operation, or worse – to a Guided Bus system (as has happened elsewhere), would be resisted in the strongest terms.

The policy for holding (or not holding) Abbey Line trains at Watford Junction, in the event of a late-running main line connection, must strike a sensible balance between punctuality targets and the line’s fundamental role as a feeder service. Over-zealous focus on performance often leads to Abbey Line trains being despatched dead on time, with consequent inconvenience to passengers who were very close to making a connection.